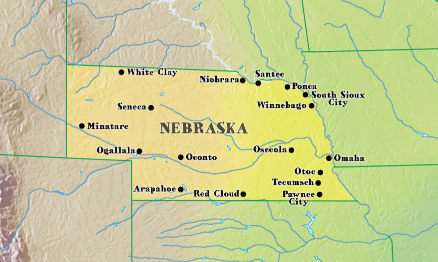 The land that covers the American state of Nebraska was home to the indigenous tribes for thousands of years. Over 15 historic tribes were identified has having lived or hunted in the territory within Nebraska state’s boundaries.

Between 1857 and 1862, the tribes gave up or ceded their land for sale in Nebraska. Today, about 6 Native American tribes have reservations in Nebraska. They are Omaha, Winnebago, Ponca, Iowa, Santee Sioux, and Sac and Fox.

The Omaha people moved to the areas of the upper Missouri and the Plains in the 17th century. Later, they became a federally recognized tribe. Today, they reside in the north-eastern part of the state on the Omaha Reservation.

The Omaha people speak a Siouan language, which is quite similar to the language of the Ponca. In the late 18th century, they became the first tribe in the area to adopt an equestrian culture. They developed a vast trading network with the French Canadian and early European explorers.

Members of the Winnebago tribe often call themselves ‘Hochungra’, which literally translates as ‘People of the Parent Speech’. By the end of the 20th century, there were 1,151 members of the tribe living in the Winnebago Reservation.

In the 16th century, the Ponca tribe migrated from the Ohio River valley to the Great Plains. They signed their first treaty with the Americans in the early 19th century. About 2 million acres of their lands were ceded to the United States according to the treaty.

Today, they are one of the two federally recognized tribes of Ponca people. The other tribe is the Indian Poncas of Oklahoma. The Ponca tribe of Nebraska is headquartered in the Niobrara village. After the passing of the Ponca Restoration Act, the tribe can now legally conduct their business in Iowa.

4. The Iowa Tribe of Kansas and Nebraska

They are one of the two tribes of Iowa people federally recognized by the United States. The other is the Iowa tribe of Oklahoma. Headquartered in White Cloud, Kansas, the Iowa Tribe of Kansas and Nebraska is governed by a five-member council. The tribe living in Nebraska are located on the Iowa Reservation. It lies in the Richardson County in Nebraska’s south-eastern region.

This tribe is officially called ‘The Sac and Fox Nation of Missouri in Kansas and Nebraska’. They are among the Native American tribes of Sac and Meskwaki (Fox) people federally recognized by the United States. In the late 19th century, about 360 members lived on the Sac and Fox Reservation. A part of this area falls in south-eastern Richardson County of Nebraska.